The ENT Department of Sri Ramakrishna Hospital boasts advanced technology operated by some of the most experienced surgeons and skilled Ent Specialist In Coimbatore. We were among the first private hospitals in the region to pioneer the transsphenoidal approach to pituitary surgery more than twenty years ago and our specialists have stood right at the forefront of the field ever since.

Our goal is to give the patient maximum relief within minimal pain inflicted.

Nasal polyps are growths in the shape of teardrops which, as the name implies, are located in the nasal passage or sinuses. They usually form in the region of the opening into the nasal cavity. A lot of nasal polyps don’t cause symptoms and don’t require treatment if they are small in size. The larger they grow however, the more hindrance they can be.

Blocking normal drainage from the sinuses, they can cause buildup of mucus and eventual infection. Nasal polyps are rarely cancerous. The prevailing belief is that they are caused by long-term inflammation or heredity. They are not painful and are mostly treatable through medication or surgery. They do tend to reoccur however.
The sinuses are the air passages within the nose. Sinusitis is a condition where they become inflamed and swollen. Typically the result of a virus infection, sinusitis may persist even after other respiratory symptoms have disappeared. It can also be caused by nasal polyps, a deviated septum, infection of the teeth and allergies.

In some rare cases, it can be triggered by fungus or bacteria. The swelling causes pain which is the most common symptom of sinusitis.

Pain may be in the forehead, on either side of the nose, upper jaws and teeth or even between the eyes.
The adenoids are tissue which are located at the rear of the nasal cavity. They are not directly visible. In little children children they perform the vital function of trapping harmful bacteria which might be swallowed or breathed in.

As the child grows, the immune system becomes stronger and the adenoids become less relevant, shrinking and virtually disappearing by teenage years. In children, as they fight off infection, they commonly get swollen.

Sometimes however they themselves might get infected and this can lead to breathing complications, ear problems and so on. The condition can be treated with medication but if it is causing trouble over a prolonged period, they may have to be removed surgically.
Also called secretory otitis media, otitis media with effusion or serious otitis media, glue is a fairly common condition in children though it may affect adults too. It can occur in both or one ear. Glue ear is caused by the middle ear filling with a sticky, glue-like fluid, instead of the air with which it is normally occupied. This dulls the vibrations passing through and results in reduced hearing.

If it goes unnoticed, it can significantly affect the child in a host of psychological ways as they find it difficult to connect and communicate with the world and people around them. Since the ear also controls our sense of balance, it can result in clumsiness. Some of the symptoms are dulled hearing, selective hearing, speech impediments, clumsiness, balance trouble and so on.

If you notice symptoms such as these in your child, please contact our team immediately.
Pituitary tumours are usually benign and, as the name indicates, develop in the pituitary gland. Pituitary tumours cause a number of hormonal problems to the patient and their location is such that they can compress vital nerves in the brain.

Surgical excision of a pituitary tumour is the best solution for any patient suffering from one. They can be surgically excised using the transsphenoidal approach (read more here).

Once upon a time, sinus surgery was performed through incisions on the face and within the mouth. Modern technology has advanced to a point where none of this is required.

Today, with minimal intervention, surgery can be performed using tools such as a nasal endoscope. This is a small metal ‘telescope’ with a light attachment which allows the surgeon to see within the nasal passages. Using special tools, growths and polyps can be excised through the nasal passage, without any extra trauma to the surrounding region. Pain is minimal, the surgery is quick and recovery times are very short.

At Sri Ramakrishna Hospital, we routinely perform endoscopic sinus surgery, to the benefit of many a patient.
These are procedures done to remove the tonsils and adenoids in children. They are typically performed as outpatient procedures. With modern techniques, it should take no more than half an hour to an hour.

Pain is minimal and the relief given to the patient is immense. The methods adopted by the surgeon (there are several) depend on the history of the child and his personal preference. To remove the tissue, the surgeon may use coblation (use of a cool electric current), dissection (removal via scalpel), electrocauterisation (electric current), harmonic scalpel (a vibrating scalpel), laser ablation (a hand-held laser), microdebridement (removal through a specialised rotary ‘shaving’ device) or radiofrequency ablation.
Sometimes fluid can build up in the middle ear due to an infection. This can affect hearing and cause discomfort.

Even after the infection has passed, the fluid may remain. In these cases it needs to be drained out. During this procedure, a tube made of plastic, metal or Teflon, is inserted into the eardrum surgically. This allows the fluid to drain out. The tube must be left in place for 6 to 12 months.

Eventually, it usually falls out on its own. Alternatively, it might have to be removed in a small procedure. The myringotomy is routinely performed by ENT surgeons at Sri Ramakrishna Hospital, to provide quick relief to patients suffering from ear infections.
Skull base surgery refers to surgical procedures which take place at the base of the skull, behind the nose. They are not within the brain. Traditionally this was a very difficult region to access for surgery and open surgical techniques involved considerable trauma to the head.

However, with the advent of modern technology and techniques, the surgical approach to this region has changed and improved considerably. Through the use of a device called an endoscope, today surgeons can see within the body while conducting procedures. It is basically a tiny telescope and camera with a light attached which beams images onto a screen. This allows a surgeon to now approach regions such as the pituitary gland, through the nose itself. In these procedures, an ENT works in tandem with a neuro surgeon.

The ENT is the expert who will do the entire approach into the affected region while the neuro surgeon may take over for the excision itself. It requires great skill and expertise to conduct this procedure and the benefits are immense. There is no external scarring on the patient, post-operative pain is considerably lower and recovery times are very fast, in comparison to traditional open methods.

ENT surgeons at Sri Ramakrishna Hospital are experts at endoscopic approaches to anterior skull base surgery and have assisted many an afflicted patient through this.
Cerebrospinal fluid (CSF) is the liquid in which the brain is bathed. The dura is the lining around the brain and it contains the CSF within it. The sinuses are separated from the brain cavity by bone.

Sometimes there may be a hole in the dura and the bone which causes the CSF to leak into the sinuses. This may have to be surgically repaired. The Department of ENT has extensive experience with repairing CSF leaks. Underwent tonsils removal surgery at the hospital, the procedure went well and been discharged very soon. Now I can feel great relief from the long bothering tonsils pain. Thanks to the ent specialist for getting done this to me.

The treatment was very relieving

I had severe forehead pain and discomfort felt around the eyes for the past couple of weeks, I consulted the hospital and the doctor diagnosed it as sinus pain. With the treatment given by the doctor, the suffering from the headache has been reduced.

It was of great help from the doctor

I was feeling pain inside my ear for 1week, I took an appointment and checked for the cause of the pain. Ent specialist identified there was an infection created due to a lot amount of wax. Now I got all the wax removed and cleared the pain also has been gone. Thanks to the doctor. 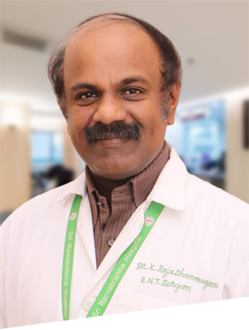 What are symptoms of ear, nose, and throat infection?
An ear can show signs like earache, and discharge; nose can likely cause a blocked or runny nose; and throat infection can show signs like sore throat and scratchy or painful throat.
Can ear infection spread to my nose?
Otitis media (middle ear infection) is a consequence of non-allergic rhinitis. The eustachian tube at the back of the nose can get clogged with rhinitis. If this tube does not work properly, fluid can build up in the middle ear (behind the eardrum) and cause infection.
What are the consequences of ignoring an ear infection?
It is necessary to treat ear infections. They can cause unneeded pain and irreparable hearing loss in your child if left untreated. Infections of the ear usually clear up within a few days. Over-the-counter (OTC) pain medications or ear drops will most likely be used to address your child's pain and fever.
What are the treatments offered at Sri Ramakrishna Hospital’s ENT department?
Sri Ramakrishna Hospital is known for adapting to the latest techniques to treat a wide range of ENT problems including the most complicated concerns. The advanced treatment methods include endoscopic sinus surgery, adenotonsillectomy, myringotomy, endoscopic anterior skull base surgery, CSF leak repairs, and many more.