Welcome to the Department of Diabetology and Endocrinology of Sri Ramakrishna Hospital Diabetes is a raging epidemic affecting hundreds of millions of people across the world.

India alone has more than 67 million diabetics, far and away the highest number in the world. With sedentary lifestyles, unhealthy diets and the pressures of modern working life, the numbers are expected to cross 100 million in the next 15 years.

It is no wonder that it is known as a disease of civilisation. Add to this health complications such as rickets which come with our childrens’ indoor lifestyles and we have a whole new challenge. Doctors at the Department of Diabetology and Endocrinology have helped thousands of patients regain normal lifestyles through a host of modern technologies and therapies such as insulin pumps and SGLT2 medication and many others. Our goal is to be the Best Diabetes Hospital In Coimbatore, providing the best treatment to patients. Read more about the department here and do visit us to know more about how we can help you overcome your challenges.

Diabetes mellitus (commonly known just as diabetes) is a metabolic disorder. When food is eaten, it is mostly transformed into glucose (sugar). This glucose becomes a prime source of energy when absorbed by cells. Insulin is required for this glucose to be absorbed. When the insulin levels in the blood drop, sugar cannot be absorbed by the cells and instead builds up in the bloodstream. This can be either due to inadequate production of insulin or the cells’ inability to absorb it. This condition is known as diabetes and there are different kinds of it.

When the body does not produce insulin it is known as Type 1 diabetes. This tends to manifest before the age of forty and often even in teenagers and young adults. It accounts for only 5% to 10% of all diabetes cases. It is progressive although the rate at which it progresses varies from person to person.

Type 2 diabetes is the most commonly occurring form of diabetes, affecting In it, either the body cannot produce enough insulin or the cells may not react to that which is produced (insulin resistance). Improper diet with excess sugar is the major contributor and obesity is a major cause. It is clearly a disease of civilisation although there is also a significant genetic factor as evidenced by it being far more common in people of
This form of diabetes is contracted by women during pregnancy during which time blood glucose levels are substantially high. Between 2% and 10% of all pregnant women suffer from it. The condition may disappear completely after pregnancy although a small percentage do contract diabetes mellitus (mostly of Type 2) later.

This form of diabetes is contracted by women during pregnancy during which time blood glucose levels are substantially high. Between 2% and 10% of all pregnant women suffer from it. The condition may disappear completely after pregnancy although a small percentage do contract diabetes mellitus (mostly of Type 2) later.

Prediabetes is a state where the body has higher glucose levels than normal but not high enough to classify as diabetes. It is a state which can last for years before transitioning to full blown diabetes.
The thyroid gland is located at the front of the neck and is responsible for producing the hormones thyroxine and triiodothyronine (the thyroid hormones) which control metabolism, heart rate, breathing, the nervous system, body temperature, weight and many other functions. Hyperthyroidism is a condition wherein the thyroid gland is overactive and results in the increased production of the thyroid hormones.

Symptoms of the condition can include:

Hyperthyroidism is most commonly caused by an autoimmune disorder called Grave’s disease. Some of the other causes are nodules in the thyroid gland, inflammation of the thyroid gland (from a virus or trouble with the immune system), excessive consumption of iodine in food or medication and pregnancy. It is diagnosed based on symptoms, physical examination and blood tests.
Hypothyroidism is a condition where the thyroid gland is underactive and produces less of the important hormones than the body requires.

It is more likely to affect women, particularly those over the age of 60. This causes an upset in the balance of reactions in the body. While it rarely shows symptoms in the early stages, untreated hypothyroidism can result in a host of conditions ranging from obesity and infertility to joint pain and heart disease.

Symptoms of hypothyroidism are many and varied but they may include:

Increased Sensitivity to Cold Diagnosis is through thyroid functions tests which are very accurate. Treatment can be synthetic thyroid hormone which has been found to be very effective.
PCOS is increasingly common in the modern age and is sometimes referred to as the ‘pre diabetes’ state. It is a disorder of the endocrine system in women of the reproductive age. Those afflicted by it have enlarged ovaries where fluid has collected in small deposits called follicles. These are located in each of the ovaries and are visible in an ultrasound. In a lot of cases, symptoms of PCOS begin to show soon after a woman begins having her periods while in some cases it may develop later. While they affect women differently, doctors look for at least two of the following symptoms.

Irregular Periods: These may include menstrual cycles of more than 35 days, failure menstruate for more than four months and extended periods which are scant or heavy.

Polycystic Ovaries: Ovaries which are enlarged and contain sacs filled with fluid, surrounding the ovaries.

The exact cause for PCOS remains elusive but it is thought to be linked to excessive insulin in the body, low-grade inflammation and heredity. A lot of other conditions can mimic PCOS, so diagnosis requires careful hormone work-up.
As the name implies, sexual dysfunction is the inability of an individual or couple to achieve satisfaction from sexual activity. The basic sexual response cycle is identified as having four phases – excitement, plateau, orgasm and resolution wherein excitement also comprises desire and arousal. Dysfunction can span any or multiple aspects of the sexual cycle. They can affect people of any age and affect both women and men.

In men it includes erectile dysfunction (inability to achieve or maintain an erection), retarded ejaculation (lack of or delayed ejaculation) and early or premature ejaculation.

Both men and women may be affected by a lack of desire or interest, and inability to become aroused and pain during intercourse. There are a whole host of both physical and psychological causes of sexual dysfunction and they each have both medical and surgical treatments. Our experts at Sri Ramakrishna Hospital will arrive at an accurate diagnosis of what is affecting you. We fully understand the deep sensitivity of the subject and are committed to helping you live the fullest life possible with dignity.
This is a condition which affects children and their bone development. Bones become soft and weak and it leads to deformities. It causes bowed legs, curved spines and thick ankles. It can also lead to fractures. Lack of Vitamin D or calcium is the primary cause of rickets. The body’s Vitamin D mostly comes from exposure to sunlight apart from a few foods. Lack of enough sunlight and the proper diet can lead to inadequate stores of Vitamin D. In some rare cases it can also be genetic.

Symptoms of rickets (severe vitamin D deficiency) would be :-

Cushing’s Syndrome is a condition where there is too much cortisol present in the body. There are many reasons for it. Cortisol is produced by the adrenal glands when they are stimulated by ACTH which is produced by the pituitary gland. Excess ACTH therefore causes Cushing’s syndrome.
It can be the result of a pituitary tumour. Cushing’s can also be caused by excessive intake of steroids. In addition, an adrenal tumour can also result in Cushing’s. High levels of cortisol can have a host of complications. It causes excessive weight gain in the centre of the body. The patient experiences high levels of fatigue, is easily bruised, suffers from hirsuteness (excessive hair growth) is prone to infection, can suffer from erectile dysfunction (men), depression, osteoporosis and so on.

Not everyone who has some of these symptoms has Cushing’s. The good news is that it is a condition which can be cured through various interventions.

Our hospital has some of the best endocrinologists in Coimbatore that treat patients with:
Insulin Pump:

Insulin pumps have changed the lives of many diabetes patients. Using the pump, the insulin can be matched to your lifestyle rather than the vice-versa. Currently most popular with Type 1 diabetes patients, those suffering from Type 2 have also started to adopt it. The insulin pump delivers short-acting insulin all through the day and night. It is administered through a catheter which is installed under the skin.

The pump itself can be carried on your person in a pocket or attached to a part of your clothing or in a waistband. Today’s pumps are about the size of a music player and look as funky and stylish. The pump continuously works to keep insulin levels optimal. When you eat you can press a button and an additional shot of insulin (called a bolus) will be administered to counter the food. It an incredibly elegant solution which has brought relief and normalcy to thousands of lives around the world and doctors at Sri Ramakrishna Hospital can prescribe and assist you with it.
SGLT2:

Inhibitors and Incretin mimetics are novel classes of antidiabetics that have proven efficacy in the treatment of Diabetes. Experts at Sri Ramakrishna Hospital will work with you to identify the right medication for particular kind of diabetes. The much-needed sugar specialist in Coimbatore

“I am a type 2 diabetic patient, I was not able to control my sugar levels. But after consulting the doctor at ramakrishna, with his help and suggestion of a good diet and exercise along with the medications, I was able to manage and bring sugar levels to a normal scale. Thanks, doctor.”

Happy with the service from the best diabetologist in coimbatore

“Because of high diabetic sugar levels, which led to cause a foot ulcer. I received treatment for a diabetic foot ulcer at ramakrishna, where there was a wound on my leg finger. After the treatment, it was healed and good it didn’t lead to gangrene. Thanks to the doctor.” 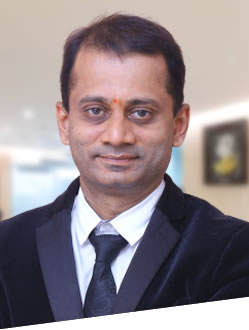 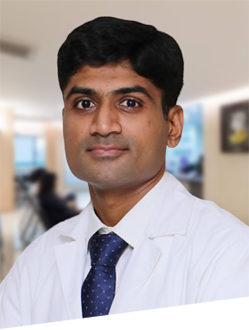 Consultant in Diabetes, Thyroid and Endocrinology

Is endocrinology and diabetology the same?
Both are internal medicine doctors, yet their approaches to treatment differ. Diabetologists specialize in diabetes and its treatment, whereas endocrinologists specialize in the overall endocrine system, including the pancreas and insulin.
Should a diabetic patient visit an endocrinologist?
If you're having trouble controlling your diabetes, you should see an endocrinologist. Your primary care physician might also suggest that you see a diabetes expert.
What diseases do endocrinologists treat?
Endocrinologists can diagnose and treat diabetes, thyroid problems, infertility, growth problems, metabolic diseases, osteoporosis, some cancers, and abnormalities of the hormone-producing adrenal glands and pituitary glands.
What are the tests offered at Sri Ramakrishna Hospital for endocrinology diseases?
Sri Ramakrishna Hospital has the best endocrinologists in Coimbatore who work round the clock to ensure their patients get the best treatment possible. To identify the issues the doctors use the latest diagnostic tests like the Short Synacthen test, Extended GTT, Water Deprivation Test, Glucose suppressed GH, and many more depending on the need of the patient.